What is it good for?


The more I tried to look away, the more my eyes got pulled back to his face; his Dali-esque mustache, beard of ample facial coverage shaved three or four days ago, and pinching eyes that made me feel he wanted to remember every single one of my features. He got up from his seat at the bus and shaved me before I realized what was happening, asking me for $80 as payment. I said “No way!”. People on the bus yelled “You got scammed” loudly and repeatedly until the bus made its next stop. We both got off, as I needed a cash machine to be able to pay. However, I kept complaining throughout until I got to cash. His eyes turned sad. He said “Life is hard, pibe” with a thick Argentinean accent, then turned around and walked away. I chased him, because I still wanted to pay him. All I meant was that $80 felt unreasonably expensive. He walked too fast for me and into a small, dark, downstairs bar by a burned-red brick building.

Inside the obscure bar everyone looked strange, and too big. The air felt damped. I found myself walking around looking for the guy with the barber toolkit. After a few minutes, tired of looking for him, I stood by one of those chair-less high tables. A waiter came, and before I could hand-signal that I wanted nothing he said “someone bought this for you”. My first reaction was to refuse it, but fearing it could be a trick I said “bring one back to the person that sent it, on me” and slipped a crisp $20 into his shirt’s pocket. 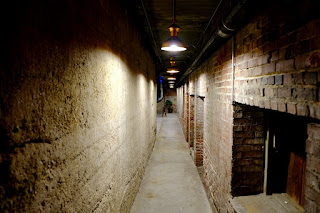 I looked at my drink. It was mostly crushed ice. I remembered why I hate mojitos so much. I felt observed the same way the barber made me feel while on the bus. Someone was trying to scam me again. Still, I took a bite off the content of my Antarctica glass. A skinny, mid 60’s, ugly woman stood next to me. She said “hello, handsome” with a raspy voice, twirling with her drink. It was now clear who sent the glass of ice.

I took half a step back as the high table got suddenly full with people. Everyone wore brown, loose suits and white dirty shirts. I was grateful to get pushed away from the old lady by force of multitude. A guy dressed as a clown with huge, wide hair, bumped me from behind and gives me a wrinkled paper bag full of old, smelly candy. I take it with one hand and check for my wallet with the other one. The guy next to me saw this and said “you shouldn’t be so paranoid”. I immediately mistrust him. A second went by and I checked for my wallet again. It was gone. I looked around quickly, hoping for a miracle. I had been thinking about moving the wallet from back pocket to front pocket since coming into this bar. 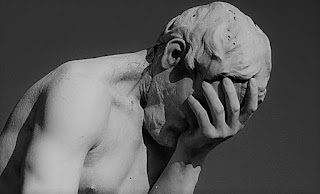 I ran to the back of the bar, where 5-6 people were all dressed as clowns. They all looked a little like my guy, but none of them was. Where the fuck is he?

How could I be so stupid? I had the good sense of putting the wallet in my front pocket, a worthless idea if unaccompanied by timely execution. I was now certain. It was all a scam.

Do you now see the island that you live in, the one that prevents you from drowning in the ocean of light? Did you see it, protecting you from blindness at the expense of your sanity? Have you witnessed the demise of your innocence?