The dead cat that lives

Life in Yala has got to be the slowest on earth. The tropical heat of the summer, people dragging their feet everywhere as if they were calmly pulling shrimp-fishing nets, the unmistaken look of acceptance on their face. As if there was nothing they could do to change their sorry lives. In a village where even the town’s idiot is boring, it takes a special kind of creativity to avoid being sucked into the blob of work-obsessed / family friendly, farmers, fishermen, laborers, cattlemen… This has to be the shittiest little town in all of Thailand. Where is the nosy Guinness records official when you need him?

I am the son of Narong, next-to-lowest ranked worker of the Muang Yala Municipal Slaughterhouse. We live next to my dad´s workplace. People like to say that you will eventually get used to the smells around you, no matter how bad they are. I never did. Waking up in the middle of the night to run outside and vomit because of the revolting smell emanating from Muang Yala will not only turn your stomach upon itself, but also the stubbornest carnivore into a vegetarian. And if the foul smell doesn’t do the trick, waking up from an afternoon nap with your face covered on a sticky film of dead bovine remains burned less than 50 feet from you definitely will. The reason people can’t get used to the smell is that it varies widely in its intensity. It is not always there, but when it is it will invariably catch you by surprise. It will sneak up your nostrils with the subtlety of the smoothest life insurance professional salesman, coincidently another strong reminder of our mortality and its unavoidable smell.

Even a glass-half-empty kind of guy like me must admit not everything is negative about the situation. One of the benefits of living next to a slaughterhouse is that you learn to accept death. One of the perils, however, is that you want to teach others to accept it too. I took it a step further, on the back of the fact that few things excite me more than torturing small, defenseless animals. I too like to teach them to accept death, only slowly. They have to keep up with the pace of the village, don’t they?

A particularly humid afternoon, my bored eyes landed on the neighbor’s cat. The animal was slowly strolling down the sidewalk in front of a fenced patio full of fierce dogs the town’s crazy old lady lived with. All seven barked furiously at the cat, which started walking even slower, feeling protected by the wired fence while in a state of fascination at the scene. I walked slowly towards the cat’s path, in an almost perfect 90-degree angle, carefully calculating our combined speed to ensure we would meet before the end of the fence. The cat kept walking with his full attention on the barking dogs, unaware of my feline advance. My heart pounded out of control in ecstasy. I prayed it wouldn’t give me away. I even stopped thinking, afraid the electric connections between my brain cells would create a noise and give me away.

The cat noticed my presence a fraction of a second too late. I grabbed him as he it turned its face to me and, without hesitation, threw him over the fence. He tried to fight, but lost vital momentum in the process. Still, he managed to hold on to the top of the wired fenced with one claw. Unfortunately for him, one of the dogs jumped and knocked him down. In his fall, the cat seemed to avoid even touching the floor in his desperate jump to escape certain death. He jumped and ran around as fast as he could, but the patio wasn’t large enough to give him a fair chance. The dogs quickly got to him, and mercilessly tore him to pieces as he noisily fought to get away. I couldn’t move, frozen by a mix of curiosity that shut any impulse to try to help him and the recognition that  the drama unfolding in front of my eyes had been triggered by my own resolute actions. What did I expect? Was the cat supposed to leave the patio bruised and with a cane, covered with Band-Aids as in the stupid cartoons I watched every day? No. I had exercised my God-given free will to help murder a living creature in a horrible way. And I liked it. And I hated it. And I was proudly ashamed. 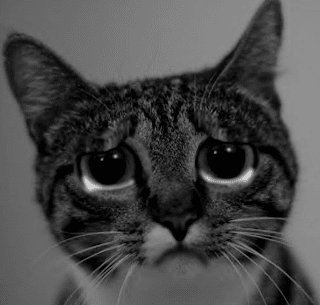 Something broke inside me in the path to becoming a man. A brutal man. A bully of mother nature, using her own power against her.

With all the commotion, my cousin Jeoun came out of her house, just across the street where it all took place. Her tired face distorted in horror as she realized what happened. She started yelling at me with anger, while her eyes spat tears of blood. I wish I could write some of what she said to me, but I couldn’t hear her. It was as if sounds had stopped reaching my brain in order to give me the space I needed to fully experience the moment. I had not only learned to accept incidental death, but also to teach others to do so, if by force. Time is a great teacher that has the habit of killing its students. I am no great teacher, but I’m good at killing my students.

I left Yala many years ago. In all this time, I have been incapable of reckless actions of that caliber. Not because I became a better person. My heart is the same tiny piece of coal it has always been. It is because of what happened the exact moment that doomed the poor cat. Instead of running for his life, he turned is head 180 degrees as our paths crossed and looked me in the eye. It was the longest split second of my life. For what seemed like years, his soul connected with mine. Beyond the tragedy, his sad eyes stayed tattooed on my brain. Now, every time I see a weaker creature with the intention of destroying it, something with claws makes me stop. I often wake up in the middle of the night from a nightmare, where a sad gray cat looks me in the eye with the saddest facial expression on earth.

Back in Thailand, I had the cruel spirit of the hungerless hunter in me. I was his promised son.

Today, I must slowly walk through life with the anguish of knowing I had the power of life and death in my hands, and lost it to a stupid dead cat. I lost it to the sad eyes of a dead cat.