Looking in all the wrong places

We no longer want to figure out the question. Right now, all we want is answers.

Joy was supposed to be a sub-division of happiness. When someone is asked about happiness, it is humanely impossible to think outside the framework of moments. We inevitably go back to the brain's archives and look for the folder titled "Joyful Moments" or "Moments of Happiness". Thus, one more limitation of the concept of happiness is that in order to be consistent with its most common definitions it needs to be ephemeral and elusive. 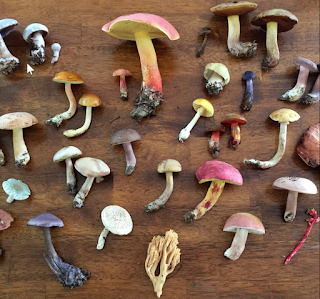 Following this logic, it is entirely possible that several/most/all of us never actually get to experience joy. Instead, we sort the moments most present in our memory and consider moments of happiness those that we enjoyed the most. In this way, enough painful memories would make an uneventful moment feel like happiness, when it was actually just an instance of reduced pain.

I forgot about the runny-nose and the overall flu-like symptoms. Figured I should attend more live soccer matches (and be alive while at it).

This week I kept asking myself how everything you find pleasurable today could merely be the result of thousands of years of evolutionary adaptation, with these apparently innocuous preferences being at the center of the survival of your ancestors. Therefore, indulgence is an act of strength, not of weakness. We're just perpetuating the behavioral traits that culminated in our physical existence. 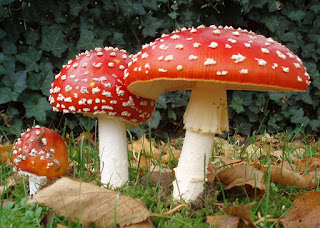 The problem is the modern overabundance of sensory satisfactions, a scenario we have not yet had time to adapt to. We are built for resource optimization, as we have faced their life-threatening scarcity for the majority of our existence. This is because we now live firmly in the world of want, not of need.

Cannot forget that any victories against weather (ability to freeze food, canning, irrigation, lighting) are temporary. In the end, if it doesn't eventually rain we're all fucked. Stability can't remain stable for long.

And thus Mario took the mushrooms and left reality for 6 hours. He was living in a world with many lives, stages, continues, princesses, coins, and turtles. He slowly crawled back, but he'd never be the same again. He saw enough to know it was always nothing but a game with lives, stages, and continues. It was the world of short term rewards, very different from Mario's current reality. 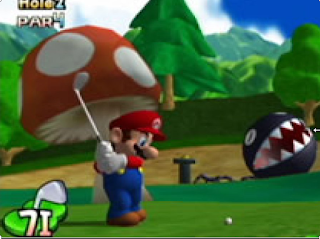 What do you want as your long-term reward? A happy kid who doesn't love you? A somewhat healthy, wealthy retirement to wear stupid light-colored pants while hitting a tiny white ball around a field with your surviving buddies? A participation trophy?

Did you end up craving exactly what you rejected throughout your whole life?

The old Fish asked the young Fish he just encountered - "How's the water?". The younger Fish looked at him, confused. Then asked back - "What's water?". The most crucial and essential realities can be the hardest to see and understand.

"It's all banal platitudes" - The Octopus.

Bestowed with the capacity to think, we are now burdened with the choice of what to think about. The thought chooses you first.

Deliberately making yourself sick to get a bit closer to a state of divinity, risking ending an already fragile existence before its "due time", may be one of the few exercises in free will we are left with. Is it worth trying once in a while?

The proverbial red pill doesn't make you sick. You just see and feel what you've been too numb to notice, to comfortable to accept. You've been sick the whole time, but didn't know it.

Also beyond our reach is the knowledge of just how fucking sick we've been all this time. The simulation is real, but so entrenched in us and intertwined with our identity that you can yell about it to our face and we will still pay $13.50 to see the concept turned into a movie instead of doing anything about it. Is power in the form of a juicy, bloody rib-eye steak worth slaving for? No. But we still chose the blue one instead because losing our reality is too much for our minds to handle, and because we already had it and learned to call it life. We can no longer afford to lose what we have decided makes us who we are.

One of the worst ambiance sounds must be the one a gas-powered hedge trimmer makes. Would it be so bad to let plants grow as they please? Why do we need to control everything? We spend so much time and effort leveling the ground, keeping shrubberies even, removing any foreign particles from our glasses, plates, food and drinks... only to then go on vacation to places with uneven surfaces everywhere, where the water is wild and considered clean, and where plants do whatever they want, where they want, when they want.

Why do we need to keep killing the very things we end up craving? Every year we make more humans, and every year we pay more and more money to find and visit uncrowded spots on vacation, away from our own creation. We are god and we are the devil, while also the mortals that have to deal with the consequences of our celestial decisions. Humanity's  main product is still shit in both a figurative and literal sense.

The leaf-blower effect: One could achieve the same in a cheaper and less noisy manner, but one wants it to be easier and faster. Thus, we sacrifice what is good about life in favor of convenience.

Independent of our relationship status, it is human nature to spend a lifetime running from those who love us, in order to be able to chase those that reject us. In dismissing us, the latter confirm that they probably own something valuable (superior genetic material, material possessions, better social status... ). Since they are chasing us, the former probably carry impairing liabilities (disease, social awkwardness, poverty... ). Life would be a bit simpler if we knew this instead of acting on it instinctively.

Truly introspective people do not go to war nor work in construction, a constant problem to the survival of our species in the way we are used to thinking of it. 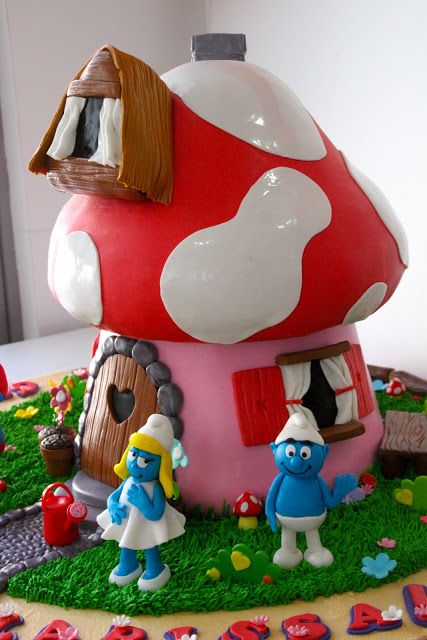 A brief dialogue in sociopathy

Claire: I couldn't believe my ears, Julius. Just two paces away, three of the students at school were gossiping about Professor Julius having an affair with one of the teachers. I was mortified, Julius. What is happening?
Julius: My darling, I swear I don't even know what you're talking about. Affair? As in... cheating?
Claire: Yes! As in cheating. My heart is broken. How could you? Is any of t true?
3 seconds of silence go by.
Julius: What are you even talking about? What are you asking me?
Claire: I can already see it in your eyes. Just want to hear it from your own mouth.
His faced slowly relaxed; jaw unclenched, making it seem as if his ears had gone down. He straightened his back. His eyes squinted halfway, followed by the subtle manifestation of a smirk that started on the corner of his mouth, making its way into the middle to eventually form a shy smile. He then leaned forward, took two steps towards Claire, and hugged her tightly.
Julius: Then you already know. I've never cheated on you, not even once.
Claire looked surprised, then calmer. She then started to slowly hug him back. Eventually, she gave in to his embrace completely, with utter abandon. 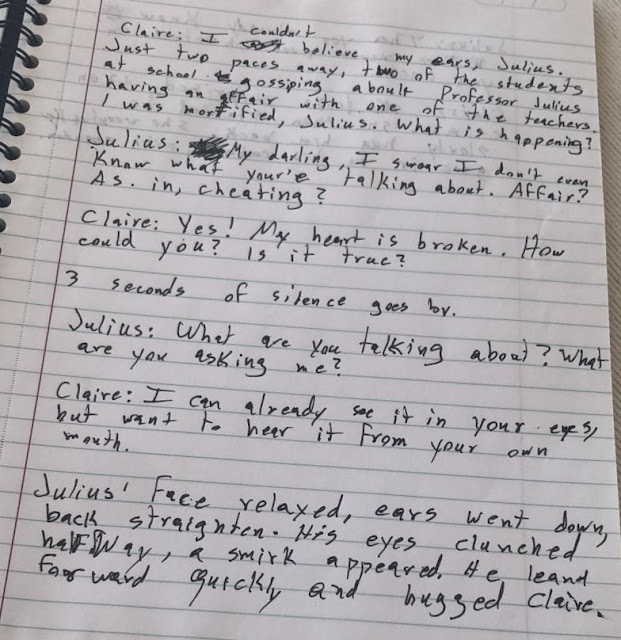