Theodore von Girnisch was put in this world to deliver God’s message through music. To that end, the message was of the least importance.

He was born in the basement of a rundown house in the outskirts of Prague, below a ballroom dance academy for the retired where he lived his first nine years. It was under the rhythmic influence of his noisy upper neighbors that his reluctantly adopting father, a down on his luck violinist named Marcus von Girnisch, realized Theo had been granted a gift denied to the rest. Crying uncontrollably seconds after being pulled from within the swollen hips of a dying prostitute, Theo stopped screaming and started to move his tiny arms rhythmically, side to side, to the music upstairs. Even more than the sounds, the vibration from the floor above seemed to travel through the old wooden structure, the bed’s body and into Theo’s soul.

Marcus had never wanted any type of commitment to anything but his violin; hence his taste for rental women. There was no rent-to-own clause to his bi-weekly affairs. One of his favorites, “one-eyed” Dorothy, often dispensed of her services in exchange for 15 minutes of music and a loaf of hardened bread. More than the music itself, Dorothy enjoyed feeling loved for the brief moments that he dedicated to repay her this way. Marcus never knew this.

Many a night of this fluids-for-music exchange eventually got Dorothy pregnant. She realized her state at too advanced a stage to have an abortion, thus decided to give the package up after delivery. Little did she know that the baby was going to fight his way into the world, even if at the expense of his mother’s life.

A seven-month baby ended up in Marcus´arms. He had left the city for a few months, only to come back to this. Theo barely survived, mostly thanks to Nataysha, the academy´s manager. Nataysha always wanted a daughter, but was so ugly no mortal ever dared look into her only eye.

Theo grew up surrounded by old adults who thought dancing could somehow distract death. He spent many a time wondering if he was some sort of freak, incapable to fit in with his "peers". Unable to find answers to his many childish questions, Theo spent his time playing the old piano of the studio and, when he wasn´t around, his father´s violin.

Despite his efforts to keep a low profile, Theo´s talent did not go unnoticed by his father, who chained him to a discolored barrel and brought him to the city to play for money. His job was to cram inside the barrel with the violin and play it. In order to fit inside, and still have room to move the bow accordingly, Theo had to jump head first into the barrel supporting the weight of his body on his neck. Marcus would later hand him the instrument, then close the cylinder with a heavy lid.

Besides providing for an irregular flow of korunas from tourists, the "Hudební Barel" (musical barrel) never became what Marcus dreamed: the ancient philosopher´s stone that would magically turn his cheap liquor into champagne. 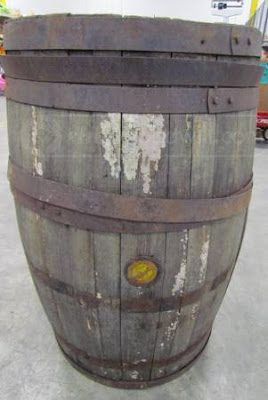 Theo´s neck started to adapt by giving up to his body´s weight. Before long, his growing up got in the way of his fitting into the barrel. Marcus was not about to buy another one, and so it was up to Theo to make himself fit into it. Soon enough, removing his shoes wasn´t enough, and Marcus had to push him to be able to properly close the lid. Life felt sorry for Theo, and helped him by stopping his growth at the height of 1.20 meters - relative to the barrel´s 0.88 meters height -.

This is how the violinist of the twisted neck came to be, his abhorrent figure forgotten after 10 seconds of the sweet melody he furiously ripped off his instrument. A paranormal force seems to possess his trembling hands when he placed the bow on the strings and started playing, moving it so fast as if to prove to his body he was no longer trapped in a barrel. 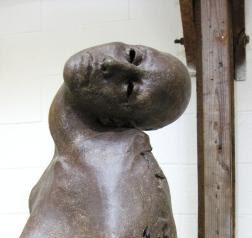 His bow, once dripping the blood of his father, became a lightning in his capable hook-like fingers. Soon, he was pulled from the streets and offered to play for audiences around Europe, if only he would promise to do so behind curtains as to keep people coming back.

His bow, earlier dripping the blood of Nataysha, became tonight the freeing instrument of a man who thought of life what he saw and nothing else. Only 23 years old, he got a chance to play in front of a large group of businessmen at the Leipzig Gewandhaus theatre in Vienna. Theo finished the first movement, then stuck the tip of his bow on the sharpest angle of his bent neck and sprayed the audience with the warm thick liquid that had contributed to his prolonged agony. He fell sideways on the floor, with an ear to the ground, which allowed him to very clearly feel the steps of those rushing to the stage to help him before expiring. Had they rushed to the stage 15 years earlier to save him, they would have been late still. 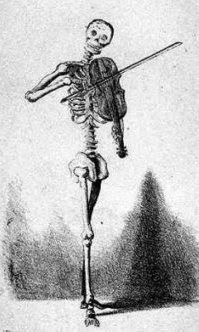 No tears were shed for Theo.