Brief accounts of the inner self - Oaxaca


San Jose del Pacifico is a small town south of Oaxaca, in Mexico. Getting here is quite the journey. Almost four hours drive from Oaxaca city, most of the route is going up and down the mountains. The views are as beautiful as they are dizzying. This is not a journey for anyone suffering from vertigo, not for the faint of heart.

Vertigo cam, in fact, result from exposure to heights; but also the consumption of substances that alter the cognitive ability of the brain. The latter can be frightening and disorienting for the occasional participant of artificially induced experiences, like the ones elicited by the consumption of psilocybe-containing mushrooms.

Intake with a small red apple, in the afternoon takes place.


5:55 pm - Ingestion of Psilocybe Caerulescens, locally known as "Derrumbes" took place on a rainy afternoon, accompanied with a small red apple to manage the disgusting earthy taste. On their own, it's like putting muddy dried celery and banana skin on your mouth. The aftertaste is just as bad, if not worse.

6:09 - Because the ingestion was solid units of the mushroom, the vision already started to become blurry. The process is slow, but more noticeable with each passing unit of time.

6:24 - Slight chills start to take place on the neck and back. Legs start to feel week, uncoordinated. Future walking will be compromised very soon. Oxygen feels scarcer. Deeper breathing is now in order.

6:40 - Some fluid starts to drop from the nose. The body is confused. The disorienting feeling that started with the senses has expanded to the mind and is taking over.

Ability to continue journaling the experience is greatly diminished after this. The remaining entries are added in a disorderly fashion, and depart from the objective, chronological coverage up until now. It is now time to enter the house of the mushroom.

Undeserving. Unworthy. Funny how clouding the body can often clarify the mind and open the soul.

Maybe I brought the rain to your life. Maybe you liked it a little bit. Maybe you still miss it, sometimes.

Come back to NY! Come to LA! See you in Mexico! Yet, here I am, hiding from myself, escaping what you call reality. That's why I'm so patient with people that do this to me.

Praise! A lifetime of seeking one bottle after the next, stepping on anyone in the process.

Storms everywhere I go. They I leave, and they flood.

It took me a while and a lot of courage to finally turn the page.

I'm supposed to be the charmer, but I've had some pretty incredibly affectionate things said to me by the women I was supposed to conquer. It's disarming, and against the rules.

How full can the stomach be, and still feel?

How much of your past defines you, how much just breaks you?

I guess I always admired funghi's ability to bring beauty out of some of the most vile of things. I mean, how cool is it that the word goes from "fungus" to "funghi" to denote the plural?

Always wondering "what do I need?", when we should be also asking "to do what?!".

They grow in the dark? Yes! And see what they make of it.

Original sketches. There is no hope of capturing everything that transpired those six hours, an eternity of sorts. 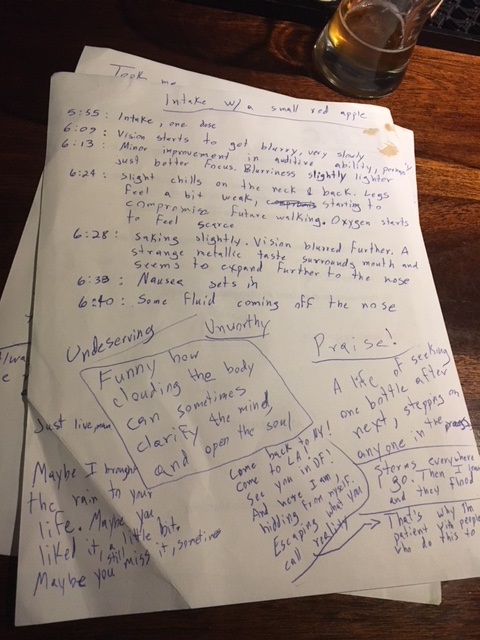 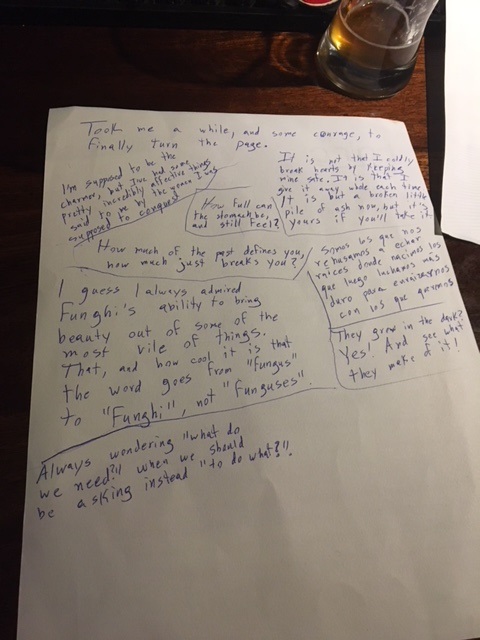