A homelesson for real men


A beggar asked me for a dollar. I asked him about the meaning of life. He seemed confused. That makes two of us. He very quickly realized he was the sanest of the pair and left without even saying goodbye. He has a lot to learn about homeless manners. A homelesson in bummanners? God, I'm in bad creative shape today...

I kept walking down the street towards the nearest water hole, and away from the noisy Bourbon street. My shoes' heels tapped loudly on the sidewalk. There was no hesitation as to my ultimate destination: oblivion. I needed a generous dose of goodbye-pain juice, and was utterly determined to get it.

Why would any sensible person question this practice? Some of us are just unable to graciously handle the unfiltered reality we are forced to endure on a daily basis. A bit of help at the hand of Bacchus is all we can hope for. Some days, we may even need a tight hug from him, the kind that may break our back but leave us in a perfect state of denial.

A lonely drinker will catch the attention of the barman if the venue is not too busy. I wasn't ready to talk about my problems, which frankly pale in comparison to others'. He was ready though. Seemed like the night had not been as demanding, and he had tasted most of the cocktails he served.

His name is Jenko, and he is Ukrainian. Well, he is American now. He has a face hardened by the sun, and a big vertical face scar from a wound that barely spared his left eye. His arms were long and muscular, covered by tattoos. One was a reference to Ukrainian mythology. Another one was a threatening goat with a fish tail ready for battle, symbolic of his astrology beliefs. He is a Capricorn. 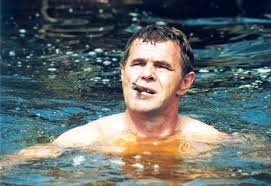 Jenko when he was 40 years old

Despite his rough looks, Jenko had the kind of tender heart that makes a person vulnerable to emotional disappointment. He lived a few years with Mary Kate, a young girl from Chicago, in what seemed like an act of rebellion towards her parents. He was 40 years old. She was half his age. He felt their souls were so close, their age difference was but a detail. She inspired him to become a better man. She told him there was good money in bar-tending; so he took the exam, quit his clerical job at a local bank and became a bartender. Over the years, her demands for a better material life kept increasing. Jenko couldn't keep up. But he was deeply in love, so he saved, got in debt and even modified his spending habits just so Mary Kate could be happier with more and more expensive gifts.He even stopped paying for his health and dental insurance. All that mattered to him was Mary Kate.

One day, Jenko came home early after a fire in the kitchen had the bar close before its usual. He bought orchids on his way home, her favorite flower. Figuring she might be sleeping after her pilates class, he tip-toed into the apartment not to wake her up. She was pretty much awake, as was their neighbor Boris. They did not notice Jenko walking in, so he was able to witness everything. And there he stood, punishing himself for being so stupid. How could an experienced man like him have been so trusting, so blind?

He walked out of the room, picked all the clothes he could find and left to never come back. Mary Kate tried to find him for some time, while secretly hoping he would never return. But she wouldn't recognize him even if she saw him. Jenko roamed the streets of New Orleans for years before a new local government program assigned temporary apartments to the homeless of a shelter Jenko frequently found the night at. He met Bill there, a one-legged war veteran that convinced him to take advantage of the free shaving benefit offered by the program and look for a job. - As he told me this, I wondered why Bill wouldn't follow his own advice but decided not to interrupt -.

Jenko has the right balance of bouncer and affable bartender. He was hired within days of his job-seeking endeavor. He is also a loyal and grateful man. He has thus stayed at the same bar for the last 15 years. The owner loves and trusts him. He has paid Jenko's medical bills when needed, and has no intention of ever firing him. We both know Jenko will only leave Woodrow's bar feet first, and I just met the guy.

I could have sworn there was a tear at the corner of Jenko's good eye when he spoke of Mary Kate. But that is probably not the case. He is a man's man; the kind you see portraying the bad guy in spy movies. Still, there is something about this hardened man that forced me to think of the tenderness that can be found within otherwise rough exteriors.The man knows about suffering after all. Is unrequited love the ultimate pain inflicted to one's soul?

I asked for the check. My flight was set to depart early the next day, and I had gotten where I was heading already. Time for a few drinks at home while preparing my luggage before hitting the sack. Jenko said "it is nathin'" in the thickest Estern European accent since we started talking. "Therapy" - he said to me. "Same thing" - I replied, throwing a couple of twenty dollar bills on the table. He smiled, realizing there was no room for argument there.

There is no power that will have me come back to that bar. The joy of seeing my new friend Jenko again would not compensate the despair of finding out he is gone. I would rather imagine he is still there, handing out the origin and solution of all our problems,while  proudly wearing his bouncer-therapist smirk. I hope he is ok, but even if not I know he can handle it. He is a man's man after all.