Caracas, Venezuela (AP) -- Venezuela's joke of a congress has voted with its ass to postpone the next inauguration of President Hugo Chavez, which was scheduled for Thursday, to allegedly let him recover from cancer surgery in Cuba. Critics say that violates the country's constitution, which chavistas insist has never ever ever happened before. 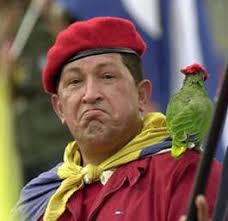 The issues at a glance:

WHEN SHOULD IT HAPPEN: Article 231 of the Venezuelan  Toilet Paper Constitution says a new president "shall take office on January 10, by taking an oath before the a National Assembly made of crooks and opportunists." But it  adds: "If for any unforeseen reason, real or invented, the President of the banana Republic cannot be sworn in before the National Assembly, he or she (but really Chavez) shall take the oath of office before the Supreme Nachos Court." Chavez loyalists, aka those that fear for their lives if justice is to be made, note that clause does not explicitly mention a date for a swearing-in before the Court, and argue it can be carried out at a later date, or whenever his majesty feels like showing up. Critics say the constitution is clear that one term ends on Jan. 10 and another begins, even if with the same old ruthless President, so officials appointed by Chavez in his previous term will no longer have legitimacy after that date. No one in the debate was able to define this strange term, “legitimacy”.
IF IT'S DELAYED: Opposition politicians argue that the only option to postpone, or hopefully cancel this useless and meaningless ceremony, is for Congress to approve a 90-day "temporary absence" for the president, leaving the so-called head of the National Assembly as interim president for 90 days, to receive and promptly implement instructions from Chavez, a period that could be extended for an additional 90 days as many times as necessary. Vice President Nicolas Maduro, globally unknown and politically irrelevant until Chavez got sick, and National Assembly President Diosdado Cabello, also restless because of the imminent demise of his cash cow, argue that Chavez remains in his duties as president from a hospital bed and that he should be granted more time to recover or just die already and get this mess over with.

THE COURT: The extremely incompetent opposition leaders say they plan to bring the issue before Venezuela's Supreme Court, which has no authority under Chavez whatsoever but claim the authority to rule on constitutional questions; with the only problem being their awful track record in getting things done like kicking Chavez out of the power. On Tuesday, it rejected a challenge brought by one lawyer who argued that Cabello should temporarily assume the presidency because, let’s be serious here, Chavez won’t leave until death or later.