The science of poetry

In San Diego, California, on the southwest corner of K Street and 6th avenue, you may find a young and dirty homeless man loosely playing the harmonica. He is not playing it to entertain the occasional pedestrian, but with an attitude that indicates his objective is to force time to pass faster. To him, the relativity of time has another meaning. It is as if he has decided that the hand he was dealt with isn't worth playing. 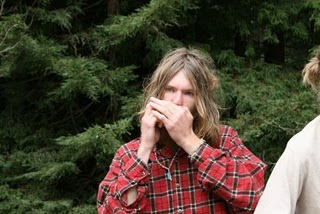 I looked at him with curiosity. His able arms and legs contrasted sharply with those of other fat and/or handicapped homeless persons lying on the sidewalk nearby. Nothing physical seemed to prevent him from getting a job to pay for a place to stay. Apparently, this is his lifestyle of choice. It is easy to pass on judgement in circumstances like this. I sat next to him and asked him for his name. Will - he said. I offered him some of my water, which made him slightly friendlier. I asked him what he did for a living. You would be surprised how much perfectly good food people throw into the garbage around here - he responded. His eloquence impressed me. I told him so, and he smirked. I am a writer - he said - a poet in fact. My poems gave me life, and it is poetry that ruined me in the eyes of society.


Well, it didn't exactly ruin me - he continued, looking a little less uncomfortable. - It opened the doors that separate what is known from what is unknown. It provided for the perspective necessary to look at life and at the world from another angle, one in which the insignificance of material possessions is blindingly evident. In fact, the things I used to own ended up owning me. They were feeding on my soul, slowing me down. All I own now is what I am wearing, and my poems. Everything else that is important for life (the sun, the air, rain...) is free. I am my own soulmate, my own beginning and end. Family does not interest me, as to me that represents fear of being alone. We are all alone, there is no point in being alive but life is an objective in itself -.

I asked him about the moment when he realized all this. I asked him how he managed to shake modern society off his back.

Walking home late from the office, I came to the realization that I was miserable. All I wanted to do was write poetry. During meetings, I entertained myself imagining fabulous new worlds, roses whose color has not yet been discovered, love so deep and passionate it didn't survive past the first week... And I started writing, and writing. On any surface, at any time. I stopped going to the office and answering the phone. I wrote on every blank page in my apartment. When I ran out of blank pages, I simply kept going on the walls, on the leaves of my plants, on my furniture... It was incredible! A new sense of freedom was running through my veins. I was hooked. 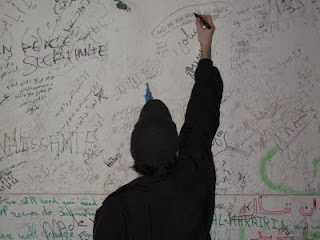 I probably got laid off, who knows? The phone went permanently silent a few months after I decided to stop paying my bills. My landlord came to the apartment to personally confirm I hadn't died. He found a hairy long-nailed hermit too busy looking for empty surfaces to be bothered by his arrival, or to react to his demands for rent money. The devil gave me the gift of joy through writing, at the price of my capitalist soul. It was quite a bargain.

I wrote odes, can zones, ballads... Left haiku poems where people could find them, sent a sonnet to every woman I knew. I couldn't stop. It became an obsession.

I asked him about his family and friends. He had none anymore. Everybody abandoned him to his newfound life.

This gift - he continued - has been a blessing and a curse. I have sent letters to my mother, but she is incapable of deciphering the meaning of my sestinas. I have been cornered; ostracized from the world.

My half-finished bottle of water stayed with him. I left, depressed and confused. How can poetry, the main distinction between human and machine, end up turning us into the latter? Did I just have a conversation with myself, instead of a random homeless poet?

Today is March 10th, the last day to pay the rent without incurring late fees. Upon dropping it in the mail this morning, I realized that I was saved. Poets don´t write checks.
Publicado por ruestrasse en 3:06 AM